Carp Climbing up a Waterfall

Carp Climbing up a Waterfall II

A former teen pop star with a burgeoning artistic career, KAORUKO explores the complex identity of Japanese women, caught, as she sees it, between tradition and modernity. She combines references to pop culture and ukiyo-e (traditional Japanese woodblock prints) in her large-scale paintings, in which she depicts languid, lingerie-clad young women in intimate domestic spaces, against silkscreened backgrounds of traditional kimono patterns. The women in KAORUKO’s “Aromako” series (2011), for example, are shown calmly smelling various parts of each other’s bodies, while staring straight out of the canvas, meeting our gaze straight on. As KAORUKO explains: “I tried to use this type of confrontational imagery to express my thoughts on Japanese culture in its relation to the role that women play, both socially and politically, in [the] present day in contrast to our history.” 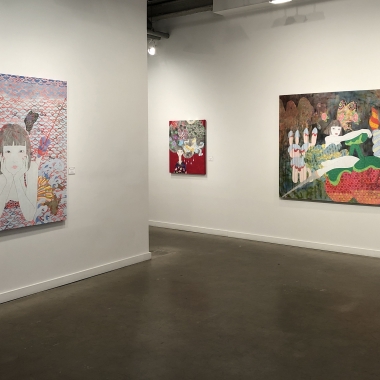